Since the pandemic lock downs, people have been suffering more and more from bad “home officing”. Unfortunately, the conditions at home are not always adequate to spend 8 hours in front of a computer. In addition, computers entered our lives at full speed, but lessons on computer health have somehow not made it to the table. This is why I created this workshop on “How to set up an ergonomic home office” for businesses and the general public. In this workshop we explore how to better computer work-conditions. Furthermore, we explore the basics of computer health. If you, too, wish to request this workshop for your business or for the general public, please get in touch! Since this workshop is given online, you can request it from any country in the world.

Computers entered our lives at full speed, but lessons on computer health have somehow not made it to the table….

Here are some testimonials from the ergonomic home office workshop:

Ava Hegedus – Head of Culture and Workplace at Uberall GmbH :

We all enjoyed Pinelopi’s workshop so much! Many of us have been having problems sitting daily in front of our computers for prolonged amounts of time – without really knowing what to do about them. Pinelopi showed us how to adopt a more mindful and therefore healthier attitude working at our desks, nonetheless still giving us a lot of very pragmatic tips and tools. “We were not taught as children about computer health. We were just given a computer and told ‘work with it!’… and we have developed many strong habits since,” was one of her phrases that stuck with me. She took a lot of time to answer all our questions and gave us very good advice. We all very much appreciated her pleasant, friendly and humorous way of teaching and we can all fully recommend this workshop!

Beginning her yoga journey in 1999, Pinelopi completed a 600 hour Hatha Yoga Teacher and Vedantic Philosophy Training course over a period of two years in Valencia, Spain. For over a decade, she has worked as a full-time yoga teacher in Spain and in 2010 she founded English Yoga Berlin.

She, then, deepened her knowledge through studying Yoga Anatomy with Leslie Kaminoff . Meanwhile, she also studied with David Moore and attended several of his “Injury-free yoga” workshops of how to apply the Alexander Technique postural alignment to yoga poses.

Currently she is in her third and final year of studying with Jorg Asshof to become an Alexander Technique teacher.

Her ergonomic consultations are based on her knowledge of anatomy, postural alignment through the Alexander Technique, and a deep understanding of the body and mind’s needs through yoga.

Her workshops and retreats are inspired by Tara Brach‘s teachings.

The virtual world is here. It has been here for some decades now. It has waltzed into our lives with dizzying speed….with all its charms, promises and dangers. Some promises of connection and closeness were kept. Others were delivered in unexpected ways. Many ended up creating the icy feeling of loneliness in an over-connected world. One thing is clear. The speed in which this digital world has entered our lives has not given us enough biological time to adapt. 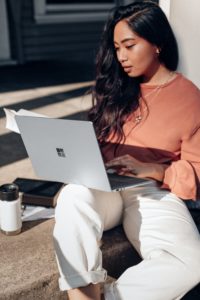 We spend incredible amounts of time working in front of computers, absorbed in our social media feeds, or receiving various forms of entertainment. Few times do we stop and become aware of our bodies. We forget about the living body. We increasingly get lost in a cloud of thoughts. Until eventually, the body starts to complain, desperately trying to catch our attention, asking for us to return to the biological vessel that makes our existence possible.

Since computers are here to stay and our use of them is not bound to diminish, is there a way that we could coexist in peace all together: computers, bodies, and presence? We must find one for the sake of our bodies, our mental health, and the quality of presence that we wish to live with.

In the next series of blogs I will suggest a combination of different aspects to become more aware of our bodies and our ability to stay mindful while working on computers. This will include looking at positions of mechanical advantage; bringing variation to the working positions we chose; ways to remember body awareness; eye care and mindfulness practices while doing computer work.

But for today, let‘s start with the preparatory work.

Good posture in front of the computer

We often are told to “sit up straight”, but do we actually know what that means? Many people use excessive amounts of energy to keep their version of “straight” in front of their computers. It is not possible to use such amounts of physical energy for a long time without cramping or becoming very uncomfortable. As a result, they then have to swing to the other extreme of slouching or collapsing while on their computer work. Many continue to swing between excessive tension and collapsing for the rest of their computer time. Both yoga and the Alexander technique are ways that people can use to help them find a middle place where sitting up straight becomes possible without using excessive muscle tension.

What does sitting up straight or upright actually mean?

I believe that the direction of “sitting up straight” or “upright” is confusing to begin with.  Does being straight mean to not have curves in your spine? To flatten out the curves? No. This would be setting us up to failure and to more problems. Rather, I suggest that we look at sitting upright as a balanced relationship between the head, neck and back.

Alternatively, some people may find it easier to think of “upright” as balancing out the three curves in their back. This would mean that not one curve is extreme and out of proportion from the other two. The challenge, though, is to balance out the curves without using excessive muscle tension.

A good way of becoming familiar with the relationship between your head, neck and back is to lay down in the semi supine pose with some books underneath your head for ten to fifteen minutes daily. In  Part II of this blog I will explain the semi-supine pose, a mindful exercise that you can practice to help increase your familiarity with this pose, and the relationship between head, neck and back.

Pinelopi specializes in Hatha Yoga. Her yoga Kreuzberg Berlin classes are open for and welcoming to beginners. She offers Berlin business yoga,  private yoga classes for people struggling with chronic pain, yoga courses and workshops.  She is currently deepening her knowledge through Leslie  Kaminoff’s Yoga Anatomy course and training to become an Alexander Technique teacher.  Due to the corona virus, we are currently giving all yoga classes live online.