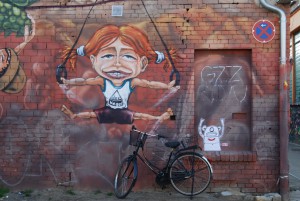 I was lucky to even make it into my first class at English Yoga Berlin. I was there well ahead of time, but the instructor Pinelope stopped me at the door and told me chances were slim that I’d be able to practice yoga with her this evening. They have many classes on offer at their studio in the exKinder Kino on Görlitzerstr. 39, but the Thursday class at six in the evening is normally full. Pinelope is very serious about her yoga. To keep up the quality, she only allows 10 students per class. I was pretty impressed with this. I’ve seen classes packed so full there is no room to do the asanas, but in Pinelope’s Hatha yoga class there were 10 yoga mats laying evenly spaced on 10 fur rugs. It looked lovely. I wanted in the class. There were two others waiting outside the class, hoping to get in as well. If the people who registered and paid for the class didn’t show up by 6PM, they were out and we were in. It’s a hard, cold world sometimes, and this time their misfortune worked in our favor. As the evening church bells were ringing, we were called into the class. I felt a little guilty when I heard the doorbell ring as were moving into the first poses, but I was glad to have a place on the mat.

There was no such competition or stress once we got in the studio. In fact this was by far the gentlest yoga class that I’ve ever been to. The class started with Savasana, the corpse pose, lying flat on our backs. As we were walking in she was talking the class through a relaxing body scan. She did another corpse pose after our first round of sun salutations. The class moved at a very relaxed pace. She really took the time to allow us to take the time to feel ourselves inside our bodies.

This was a beginners class, but beginners or all levels, mean different things to different instructors. I usually only go to beginners or all level classes, even though I’ve been practicing for years, and I’m still almost always struggling to keep up. But Pinelope really designed this class with the newbie in mind. She was very good about breaking down all the asanas into moves that each level could do. Every step of the way she would pause and say something like, “If you’re in this pose and are thinking, ‘Wow… cool stretch.’ Then don’t go any farther.” I was warm and sweating after the first couple of sun salutations, but this is the first yoga class that I’ve been to that I wanted to do more than the instructor was asking of me.

During the last Savasana, she did a modified Yoga Nidra exercise that was the highlight of the class and made me curious if she was practicing the art of magic. She started with the usual drawing of attention to the body parts, starting with the right hand then focused in on the right thumb, then fingers, moved up the hand and arm and down the body to the toes. She did the same thing with the left side. She started the body scan again from the top of the head and down the front and again from the toes and up the back. According to her bio on the website, she speaks about five languages, but I imagined that her native tongue is Spanish or some other Latin flavor. (I later found out that she is in fact Greek.) Her voice is strong and distinct, and as she spoke, it felt like a firm hand was pressing gently over each body part she mentioned. But even though this was pretty good it wasn’t even close to the best part.

The best part was when she directed our attention to the sounds outside the yoga studio. The yoga studio is right outside of Görlitzer park where the usual hum and thrum of the city prevails. After bringing our attention to the noise, she had us count the sounds we were hearing. I was surprised to find that there was a finite number of sounds, just a few really. Kids were playing. Cars drove by. People were talking in the courtyard. Someone was hammering and that was about it. She had us focus on each sound individually, spending time on each sound before moving to the next. Discretely the sounds were relatively manageable. Then she had us bring all the sounds together and listen to them all at once. It was a few moments into this that she started a Tibetan singing bowl. Slowly and softly the circular ringing tone of the singing bowl rose louder and louder until its sound overpowered all the other sounds we were focusing on. Then she stopped playing and let the sound ring out. As the sound of the singing bowl faded into nothingness, so did all of the other sounds. There was almost total silence in a yoga studio that was just few moments ago swarming with noise from the outside. It was like she took a volume control a turned down all the noise of the city. It was a brilliant and masterful control of the senses.

I asked her about the Yoga Nidra, and she said it was just a small sample of the work that she does. She has a class on Tuesdays at 8PM where she really explores “the yoga of the mind” as she calls it. I put the Tuesday yoga class in my calendar as soon as I got home. I’ve got to try it.

I had a friend ask me a couple of weeks ago, when I told him that I was doing this blog project, if I knew of any really gentle yoga classes, and even though I wanted to sound like an expert, I really didn’t know what to tell him because I had just started the project. But now I know just where to send him, English Yoga Berlin. Unfortunately this class at 6PM on Thursday is full. But English Yoga Berlin has many class on offer. I encourage you to check one out.

“This teacher’s yoga changed my life”

I used to think yoga was kind of a joke. I had taken classes all over the world but never found a teacher or a practice to commit to until I met Pinelopi. Her kindness, calming nature and sensitivity are just the beginning of what makes her so wonderful to take classes from…

She is fluent is several languages and as a result her teaching and word choices are very descriptive and deliberate. Her voice is soothing yet strong. She not only often demonstrates a pose but also breaks it down into levels depending on how you are feeling on a given day. This encourages a high level of body awareness and self care. Very in-tune with the people in her class, she pays close attention to needs and adjustments while keeping an overall class flow. She is deep and spiritual enough to make you certain that you are doing something profound for your body mind and spirit, but she never goes off on terrible esoteric rants or delves in ignorant over simplifications of karma. Her classes are extremely well planned and it is clear that each move has been designed to flow into the next, to balance out the energy and work being done on both sides of a pose, and ultimately to produce pleasure in the body for maximum benefit.

I was fortunate enough to study with her for almost 2 years. Pinelopi’s instruction now goes with me everywhere, even into lesser yoga classes. The breathing techniques and paying attention to my own limits along with her amazing guided meditations have become a cornerstone of my evolutionary process. I am INCREDIBLY grateful.

10 years ago I had a very bad yoga teacher experience, I hurt my back for half a year. Needless to say I was quite scared to try it again.
Pinelopi with her warmth and welcoming way taught me to accept my body and mind for where they are. Observing instead of judging.
” the grass doesn’t grow from pulling” she said- a lesson, I’m greatful to say, trickled to other areas of my life.
I recommend Pinelopi as a teacher with all my heart.

“Best teacher I met so far!”

Pinelopi is a great teacher.
She is open, friendly and obviously enjoying what she does.
I wanna recommend her for beginners as well as experienced yoga students. She is demonstrating as well as explaining. And she always offers various stages, so you can go as far as is good for you. She is encouraging you to figure out what feels good for your body while also respecting your limits. Your own possibilities and boundaries are more important then competing or receiving a certain goal. Adjustments are made, if you want to.
She taught me to focus on myself to be able to let go.
Most people leave her classes with a huge smile on their faces 🙂

This site uses Akismet to reduce spam. Learn how your comment data is processed.