It wasn’t until my 30s that I started realizing there was something off about my menstrual cycle. I’d always had pain during the first few days accompanied by heavy bleeding, and often experienced what is called ‘breakthrough bleeding.’ But it gradually started to get worse, until there were months when I was bleeding every day of my cycle. With the advice of a friend, I went to see a naturopath, who prescribed homeopathic medicine (specifically, venom from the snake, Lachesis). I was open to trying it, but after about half a year, I felt no change for the better, and out several hundred dollars. In the meantime, I moved 5000km to another city for graduate school. 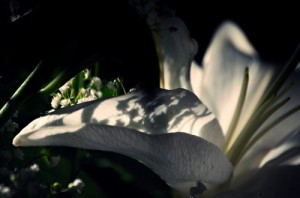 At this point I’d had a yoga practice on & off for about 8 years. After I moved, I made an effort to continue my yoga practice and
discovered many more different teachers and styles of yoga than I had before. I felt that my practice had been good for me ‘physically.’ I became more aware of the pain I was experiencing and was able to ease it a little during my menstrual cycle. But I didn’t recognize the healing benefits until much later on. I continued to struggle with menstrual cycle problems, and had now built up a lack of trust towards naturopathy. So I tried allopathicremedies – the birth control pill was advised for hormone balancing, even though I didn’t need it for contraception, and I had several invasive surgeries. After the second surgery to remove ovarian growths, a biopsy showed that it was endometrial tissue. That was when I got the diagnosis of endometriosis. But the hormone therapy didn’t seem to work: the tissue kept growing, albeit perhaps slower.Endometriosis is a rather common illness, affecting approximately 10% of people with female reproductive organs, and perhaps more who show no symptoms. The allopathic methods of treatment vary from mild hormone treatment to organ removal surgery. Sadly, I know several people who have had full hysterectomies, and yet still experience the return of growths. Growths root down onto other organs or muscles, making them difficult to remove completely and can cause lung collapse, kidney failure and/or extreme pain. Endometrial tissue can often even grow on the scar tissue from previous surgeries! Hormone therapy such as IUDs or contraceptive pills can slow the growths and relieve some pain, but not always. Sometimes androgen hormones are recommended to induce menopause. One person I know had tried this method twice and still experienced the return of the growths and painful menstruation.Often, pregnancy and subsequent breast-feeding can act to “re-set” the adrenal system so that endometriosis may not return. Menopause may see an end to more growths, but the ones that have already rooted down may continue to grow. There has been some evidence to show that even people without ovaries and a uterus may develop endometriosis on the prostate. It is seen by the medical system as a woman’s disease, making it difficult for male-identified people to receive proper treatment.

Having no success with allopathic or naturopathic methods, I began to investigate the alternatives. My personal approach to healing began when I decided to become a yoga teacher and delve deeper into my practice. I read this book that recommended a strict endometriosis diet and followed it dogmatically for one year. And I tried out many other modalities – body talk, the sadhana practice of kundalini, myofascial massage, acupuncture, mindfulness meditation and medicinal roots. I sought advice from elders and spiritual practitioners. A couple years ago, I had yet a third surgery – recommended because of something that looked cancerous but turned out not to be. All of the methods I had tried became too much for me to keep up a regular practice with, it became a stress to try to keep up the discipline of the diet. And I wanted to do other things than focus on my body all the time! But I learned an awful lot through experimenting with different things and I eventually found what worked for me.

Endometriosis is an immunodeficiency illness, attacking the body when it’s low on other resources, so I focused on trying to keep healthy. I also became convinced that stress causes endometriosis by the physical tightening of muscles around the pelvis. The practice of mula bahnda (the root lock) brought more awareness for me about what was going on in my pelvic area. During menstruation I now try to focus on letting go of any tightness, sometimes even doing exercises to push out any stuck endometrial tissue. And I am also careful not to do inversions during heavy days. I continue to make smoothies out of spirulina (for immune boosting properties), maca root (for adrenal health), and trying to not let stress overtake my life, while keeping a balance of having some fun, expanding my limits and moving beyond my comfort zone once in awhile. I occasionally get some pain and breakthrough bleeding, and then I know it’s my body telling me to slow down. So far, the growths have not returned, and I’m still years away from menopause! It may not take becoming a yoga teacher for you, but I know there’s a way that you can heal yourself too.

Juli teaches Vinyasa Flow Yoga and Restorative Yoga in our Berlin Kreuzberg studio. She continues to explore self healing with yoga and encourages her students to do so, too.